Hi! I hope everyone had a good weekend, now that Monday is with us once again. I spent half of it holed away in a coffee shop trying to write a paper, but mostly just watching dogs pass by the window, and wishing I was outside with them. 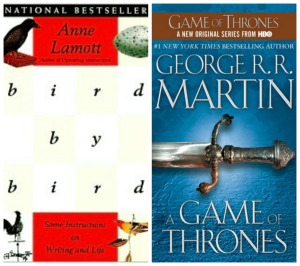 More importantly, with some of the Audible credits I had piling up, I decided to get A Game of Thrones, as a last attempt to get into the series. I should’ve tried this way sooner apparently, because I LOVE it so far.I tried watching the show once, and only made it 15 minutes before there was a beheading and had to turn it off. For some reason reading/hearing about it is one thing, but if I have to see it, forget it.

I liked it so much though that I picked up a copy of the book so I could read when I wasn’t listening. The last book that made me do that was The Goldfinch, and we all know how I feel about that. (INSERT HEART EYE EMOJI HERE).

I’m also working my way through Bird By Bird: Some Instructions on Writing and Life by Anne Lamott, and loving that, too. Essays have been working for me lately, so add in advice about writing and I was guaranteed to love this.

What are you reading this Monday? 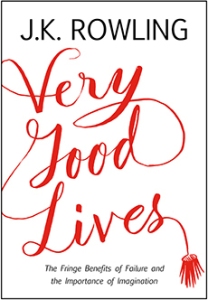 When I found out J.K. Rowling had a new book coming out, you know I immediately had to pre-order it. I had my “confirm order” finger so ready to go, that I didn’t notice that I was ordering a copy of Rowling’s 2008 Harvard commencement speech. I was expecting something more along the line of The Happiness Project. I hadn’t read the speech before, so it wasn’t a problem, I was just surprised when the package that came in the mail was so small.

But inside the tiny box was something only J.K. Rowling could make so magical. As tiny as the book was, it was filled with so many inspiring words about the future, and life and making your imagination do everything it can.

The illustrations going along with each page just brought it to life, and I highly recommend giving this a read, even if you just listen to the address or find a copy online! If you do decide to purchase it yourself though, proceeds go to the Lumos Foundation, which J.K. Rowling founded.

On Taking Control: “There is an expiration date on blaming your parents for steering you in the wrong direction; the moment you are old enough to take the wheel, responsibility lies with you.”

On Living On Your Own Terms: “Ultimately, we all have to decide for ourselves what constitutes failure, but the world is quite eager to give you a set of criteria if you let it.”

On Failure: “It is impossible to live without failing at something, unless you live so cautiously that you might as well not have lived at all – in which case, you fail by default.”

On Moving Forward: “The knowledge that you have emerged wiser and stronger from setbacks means that you are, ever after, secure in your ability to survive. You will never truly know yourself, or the strength of your relationships, until both have been tested by adversity. Such knowledge is a true gift, for all that it is painfully won, and it has been worth more than any qualification I ever earned.”

On Life: Your qualifications, your CV, are not your life, though you will meet many people of my age and older who confuse the two. Life is difficult, and complicated, and beyond anyone’s total control, and the humility to know that will enable you to survive its vicissitudes.

Have you read J.K. Rowling’s speech? What’s some of the best advice you’ve ever received?